So what harm will reach the devs if they make the drop rate 100% while whatching ads ?

Thats will benifits the devs cause everyone will watch ads

Frags for ads? I can watch ads for frags? Never saw that feature.

If you’re not getting the mission reward from watching an ad, that is a bug and needs to be taken up with in-game support via a support ticket.

@WalleWu I’m assuming they’re talking about how you can use your free quick win ads on hard mode missions for frags since it’s the most stamina-effective way to use them.

Thought that too, but you never know with HHG

What do you mean? Watching an ad doesn’t change drop rates at all. It just gives you a free quick win for no stamina. The drop rates are the same as if you had just ran the mission normally.

Thats the point
Why when watching ads the drop rate would not be 100% ?
In the end we r watching ads

I believe that Zali is trying to say that because we watched an ad to complete a mission, we deserve to get every drop from that mission. This would be very nice to have, but with the business model that Hot Head Games has I highly doubt they would add this.

just watch ads after using all my energy, farming fragment

Watching 12 ads equals up to 216 energy, depending on which mission you use them, which is about 80 gold you get free per day.
Not that bad of a deal, even without granted drops.

I watch ads for free hard modes only. The free frags are guaranteed. Equipment is a secondary issue to me on free runs.

If you got 100% of the drops every time you watched an ad, it would totally break the game economy. Some platinum drops have around a 10% drop rate. So watching an ad would be worth 10 normal runs if you were guaranteed to receive each drop. It doesn’t make any sense at all to me that watching one 30-second video would equal out to 100 stamina. That’s over 800 free stamina per day for doing basically nothing.

We’ve been experiencing trouble with our Ad network and our rewards. We are working on a solution with them on this issue. We want to make the rewarded Ad system more reliable.

@Huginn - Thanks for the info but for what it’s worth, OP of this thread is directing frustration toward the fact that each mission reward is not 100% guaranteed when watching an ad for a free win; it’s not in reference to any technical issues.

I would support an increased drop rate for watching ads to complete missions. Maybe not 100%, but 2x drop rate seems fair, and an extra incentive to watch the available ads per day.

If I can obtain an item from 3 separate missions, does each mission give the same percent chance to receive that item, or does one mission have a higher percent chance than another?

While I really don’t see any reason for the intentional obfuscation of the actual drop rates, this at least has been answered by a dev in the past. Drop rates are tied to the items themselves and are independent of which mission they are found in. So any mission that drops a given item drops it with the same rate as the others.

The question of differences between normal and hard missions however remains unanswered.

Even sometimes doesn’t give the rewards at all.

I think I finally got what the trouble is.
If I watch an add atm it doesn’t grand me a quick win, it just grands me nothing and there is no win roved from the limit for frag missions in hard mode.
It has nothing to do with drop rates, it is simply a bug which prevents you from getting the reward, a free quick win, for watching the video.

Having the same issue as WalleWu mentioned. Started sometime yesterday. Had about 3 bonus quick wins left I was unable to use. And still no luck with my new daily batch of free qw’s. Just getting the “Not enough stamina” screen and no quick win ever happens: 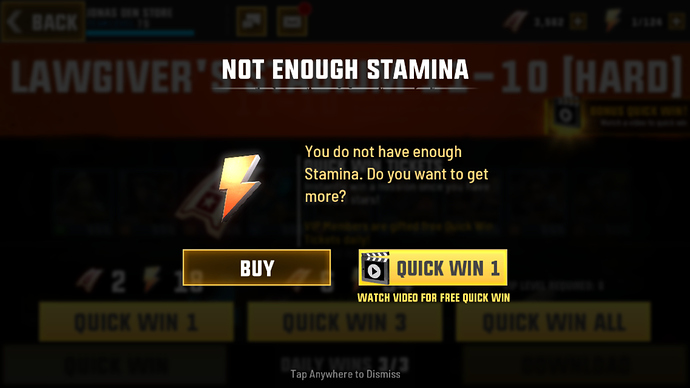 Reported the issue in-game. Then got a response saying it’s a known issue that’s being worked on, but the reason I wasn’t getting any rewards was because I’ve already consumed my daily limit. Which obviously can’t be the case since so far I haven’t been able to get any free qw’s at all since yesterday.